The spine makes up the core of the skeleton and is essential to our existence. Through evolution, the human spine has become unique. Due to the fact that we ambulate on two feet and do not have a stabilizing tail, our spines are vertical in nature. Due to this, our spines are susceptible to a myriad of pathologies. This increased susceptibility combined with our ‘western lifestyle’ causes about 50% of the adult population to have regular back complaints to some extent. Back complaints are the biggest culprit of sick/work-leave and have a high financial impact on society. (Translated from source: leerboek orthopedie)

Different pathological presentation of the back:

Lumbar stenosis (narrowing in the lower back):

A lumbar stenosis or narrowing of the lumbar spinal canal is a pathology that mostly occurs in the elderly population. A person suffering from a stenosis will complain of pain in the legs whilst walking and standing. It is not always a painful feeling, but may also present as a feeling of fatigue. As the complaints worsen, so does the ability to walk long distances. Having a seat or leaning forward will help temporarily alleviate the complaint. Generally the pain is present in both legs, but in some cases symptoms may only be present in 1 leg. Lying on ones side with the knees pulled up to the chest also alleviates the pain. Standing still after walking does not alleviate symptoms as pain may arise during prolonged standing. Rather than walking upright like they used to, the patient will choose to slouch as this position alleviates the pain. People suffering from a stenosis find it increasingly difficult to complete activities of daily living such as going grocery shopping or other social activities, putting them at a higher risk of social isolation. Moreover, it is remarkable that patients suffering from this have no problem cycling without any leg- and back discomfort. This can be explained as the bent over posture adopted while cycling creates more space within the spinal canal.

The cause of the complaints is due to the narrowing of the canal in which the nerve resides (stenosis). As a result of continuous loading over time, the spinal column shows degenerative changes; though the severity differs from person to person, this degeneration is a normal part of the aging process. This degeneration within the joints is also referred to as arthrosis, and occurs in other parts of the body including the hip and knee joints. As a response to arthrosis, the spinal bones become thickened and create a narrowing of the neural space. Moreover, the ligaments in these areas also thicken, creating even less space for the spinal cord and nerve roots. The amount of space left in the canal is dictated by the severity of the degeneration and by the initial width of the canal which differs from one individual to another. 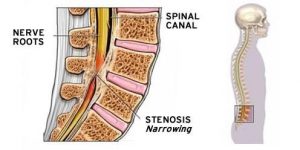 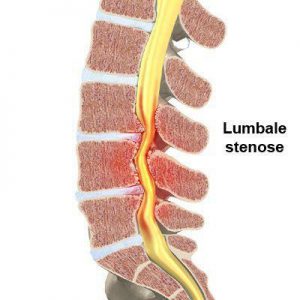 Scoliosis is a three-dimensional sideways curvature of the spine. A curvature as well as a torsion occurs in the spine. The spine can curve to one side, creating a c-shaped or single curve, but generally there are two curves creating an s-shape. The torsion of the spine causes the ribs on the back to be elevated. This elevation is referred to as a gibbus.

In The Netherlands approximately 60.000 people have a scoliosis and each year this number increases by 1000, generally females between the ages of ten and eighteen years of age. Each year approximately 6.500 patients are treated in the hospital of which 600 undergo surgery.

A scoliosis can sometimes already be present at birth, but in most cases it occurs during growth. In 15% of cases scoliosis is congenital in nature. Generally the curvatures can only be seen when the child is around 10 years of age. Sometimes the scoliosis is caused by abnormalities of the bones, nerves, muscles or of connective tissue. In 80% of cases the true cause of scoliosis remains unknown. A scoliosis can also occur at a later age. Generally this is the result of the aging process.

The sacroiliac joints (SI-joints) are present bilaterally in the lower spine. The SI-joint acts as a bridge between the two pelvic halves. Complaints of the SI-joint can be due to a joint blockage, an increased mobility and/or injury to the ligaments surrounding the joint.

Picture: Pain in the SI-joint 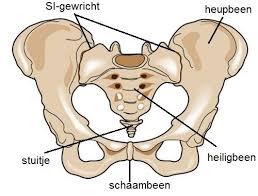 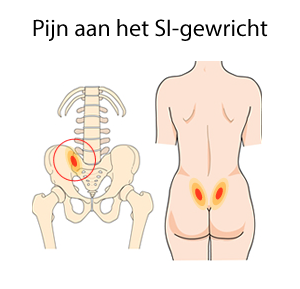 Picture: Healthy back and Ankylosing Spondylitis 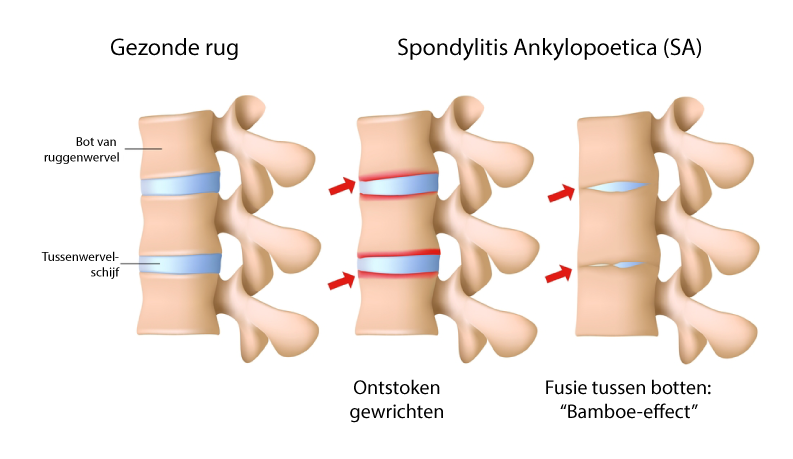 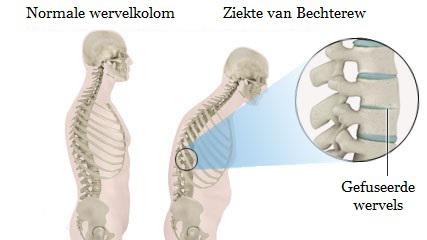 Scheuermann disease is a growth related disorder. This pathology often occurs between the ages of 13-17. This disorder causes a deformation of the upper vertebrae in the back. The cartilage on the anterior side of the vertebrae slowly turn into bone. The vertebrae becomes flatter on the front than the back creating (wedge-shape). In turn, the upper back become increasingly rounded. This is referred to as a kyphosis. A slight rounding of the upper back is normal. Scheuermann disease causes and excessive rounding or kyphosis.

The cause of Scheuermann disease is still unknown. The disorder lasts for a few year until growth stops. The increased kyphosis remains, but it does not worsen after that. 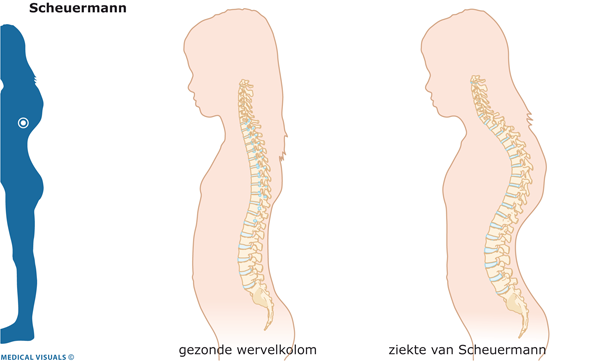 Osteoporosis occurs when the rate at which bone density is lost is greater than that of it being produced. Because of this the bones become brittle. The vertebrae become more hollow and therefore weakened. Possible causes are: 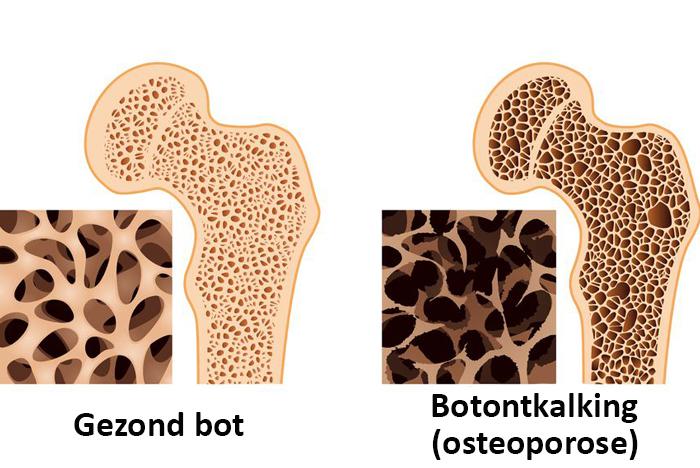 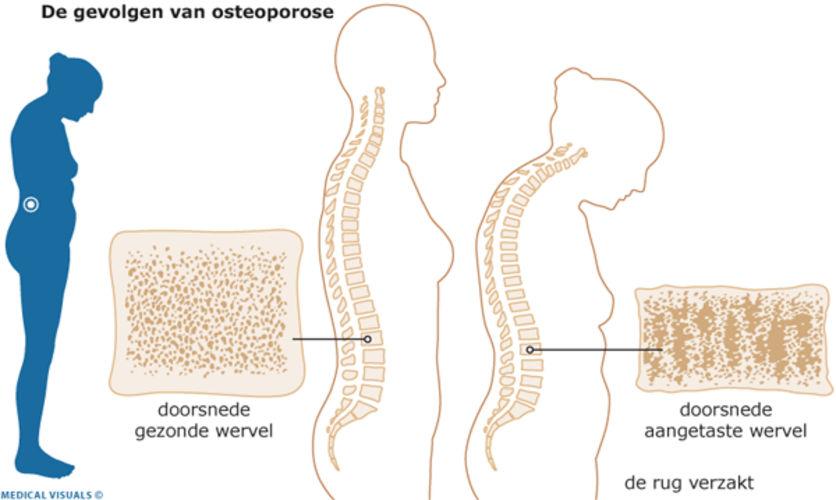 In layman’s terms this is also referred to as wear and tear (degeneration). In this case, the joints aren’t entirely degenerated, as cartilage has the ability to heal and new cartilaginous tissue is consistently being produced. Arthrosis is a disorder of the cartilage in the joints. The joints become stiffer and this is especially noticeable when getting out of bed first thing in the morning. Through movement the pain and stiffness decreases. Arthrosis is most prominent in the hips, knees, thumbs, and fingers, but can also occur in other joint within the body.

The Orthopaedic Manual Therapist can improve the mobility of the painful joints using special techniques, which alleviates the pain. Furthermore, the therapist will assess your overall movement patterns and treat additional limitations (which can be present in other parts of the kinetic chain). Using this strategy, the therapist will guide you to move better in order to avoid pain and stiffness.

TOP
We use cookies on our website to give you the most relevant experience by remembering your preferences and repeat visits. By clicking “Accept”, you consent to the use of ALL the cookies.
Cookie settingsACCEPT
Manage consent

This website uses cookies to improve your experience while you navigate through the website. Out of these, the cookies that are categorized as necessary are stored on your browser as they are essential for the working of basic functionalities of the website. We also use third-party cookies that help us analyze and understand how you use this website. These cookies will be stored in your browser only with your consent. You also have the option to opt-out of these cookies. But opting out of some of these cookies may affect your browsing experience.
Necessary Always Enabled
Necessary cookies are absolutely essential for the website to function properly. This category only includes cookies that ensures basic functionalities and security features of the website. These cookies do not store any personal information.
Non-necessary
Any cookies that may not be particularly necessary for the website to function and is used specifically to collect user personal data via analytics, ads, other embedded contents are termed as non-necessary cookies. It is mandatory to procure user consent prior to running these cookies on your website.
SAVE & ACCEPT